“The first day of spring is one thing, and the first spring day is another.”

I don’t know about you guys, but I celebrated the spring equinox with a big, sweet chunk of chocolate cake. It’s official: winter is over! In fact, I made it a double slice: one for the celebration and one because I’m carb-loading for the Rome Marathon. You can probably imagine my disappointment, when bonny Scotland fathomed a hailstorm during yesterday’s tempo run. Maybe I should have eaten the cake outside all while shouting “It’s Spring!” to the world, as my country evidently hasn’t gotten the message yet.

As such, my imminent journey to Rome can almost be considered an act of rebellion against the still very wintry storms we are experiencing up here, rather than an indulgent spring vacation. Either way, I’m so childishly thrilled that I have to keep reminding myself that some people find celebratory dances inappropriate in public.

I’m in for a long weekend of warmer, longer days (best enjoyed with ice-cream and a good friend!), meandering around countless ancient sites, enjoying meals of pasta and red vine in the evening sun and all topped off with a marathon on Sunday morning. Seriously, does it get any better? So far, I’m pleased to report that I have actually tapered (at least kind of; let’s not mention the half-marathon I raced last weekend!), that I have so far resisted any urges to shoot for a crazy race time in the Rome marathon and that I fully have embraced the carb loading.

They say that sooner or later everyone finds their way to the eternal city. I’m only hoping that spring has stumbled upon the road to Rome as well. 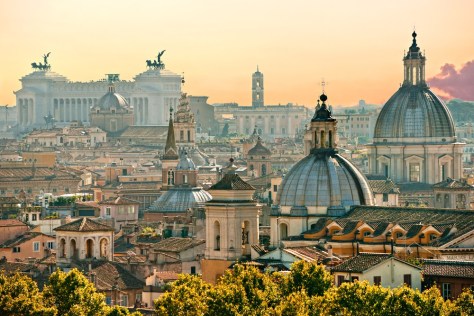 24 thoughts on “Chasing Spring To (And Around) Rome”